“A local dance performance to pray for a good harvest"

Hachinohe Enburi is a dance that grew out of the area's harsh winters.
Dancers called Tayu wear sparkling eboshi headdresses and perform a dance in which they scrape the frozen earth,
expressing the people’s prayers for a good harvest and the arrival of spring.

Designated as an National Important Intangible Folk Cultural Property, the “Hachinohe Enburi” is a local dance performance expressing prayers for a good harvest. The dance is said to take its name from a farm tool called “eburi” (or “iburi/yusaburi"), which makes flattens the ground. It is a ritual for shaking the gods of the fields to wake them up and to put the people’s spirits into the earth.
The dancers, called Tayu, wear large, brilliantly-ornamented eboshi hats in the shape of horses' heads. Enburi’s most unique and distinctive feature is these hats and the way the dancers  wearing them shake their heads around in wide arcs. The dance expresses the entire set of actions involved in rice cultivation, including sowing seeds and planting seedlings.
Between the dances of the Tayu, adorable performances of Shukufukumai dances by children are presented for the audience to enjoy. 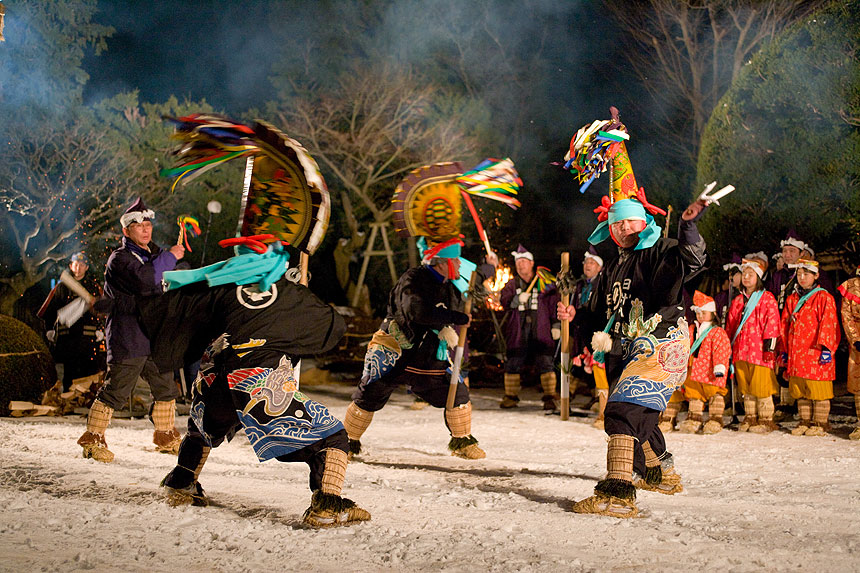 Every year, early in the morning of February 17, the Enburi groups gather at Chojasan Shinra-jinja Shrine and pray through the Enburi “suri” dance in front of the main hall.
This Enburi, performed in front of the gods, has a solemn atmosphere. 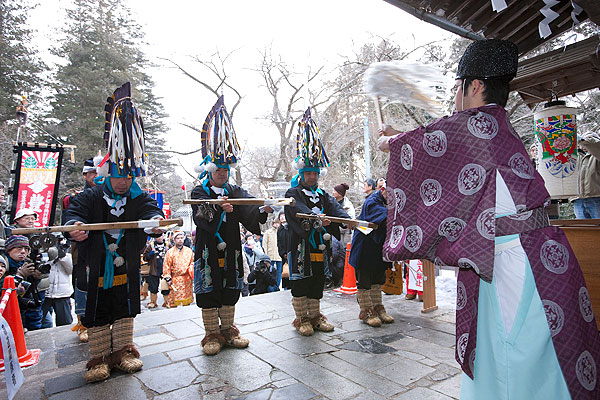 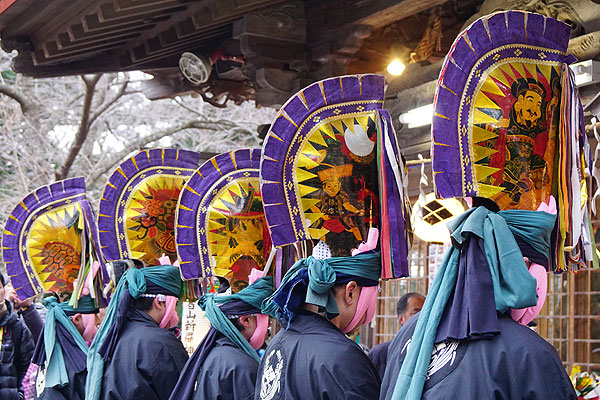 When the prayers at Chojasan Shinra-jinja Shrine have finished, the Enburi groups team up to form a procession which parades through the town. The highlight is the gathering of some thirty groups in the city center to perform simultaneously in the Issei-no-suri. Among the many Enburi events, this is one of the main attractions. 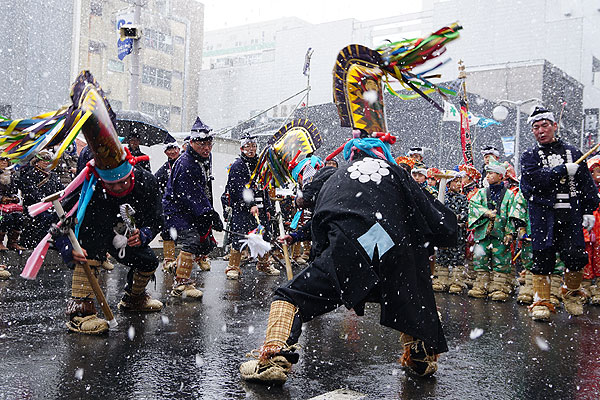 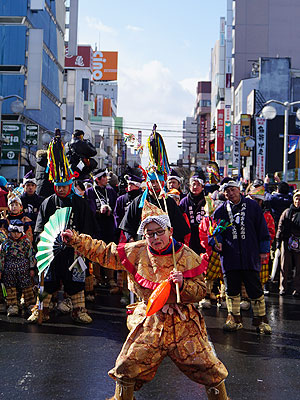 Gozen Enburi is a relic from the old days when Enburi was performed before the feudal lord. Nowadays Enburi shows are performed in front of the mayor and related people by seven groups, which change on a yearly basis. The general public is also welcome to enjoy the show. 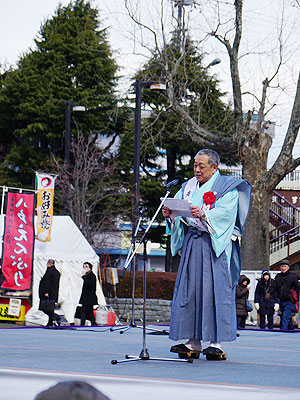 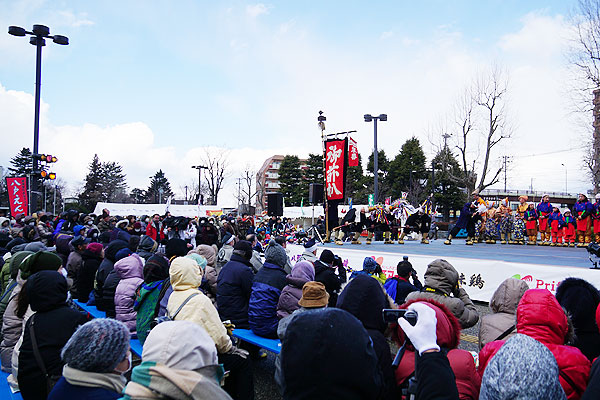 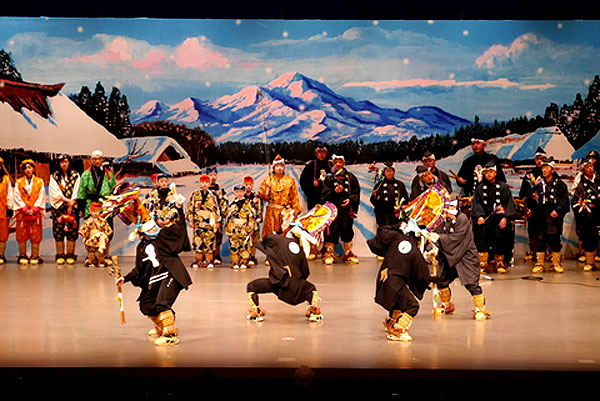 These Enburi performances take place at the Hachinohe City Public Hall. Every aspect of Enburi is showcased, from dynamic suri dances to adorable Shukufukumai children's dances.

“Kagaribi Enburi” is held in the evenings during the festival period. Enburi dances are performed by the light of a bonfire in the public square in front of Hachinohe City Office. Feel the emotion as the eboshi headdresses worn by the Tayu dancers sparkle in the firelight and the night sky resounds with festival music. The allure of Kagaribi Enburi is completely different to that of daytime events. 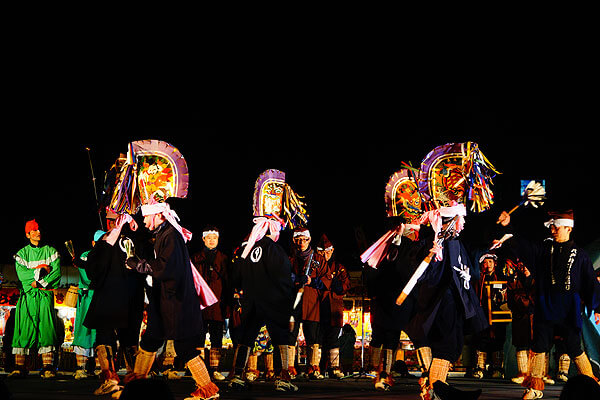 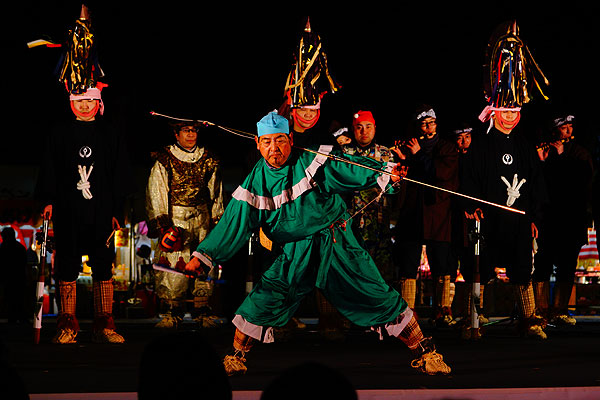 Enburi performances are held on a stage specially set up in the public square in front of Hachinohe City Office. 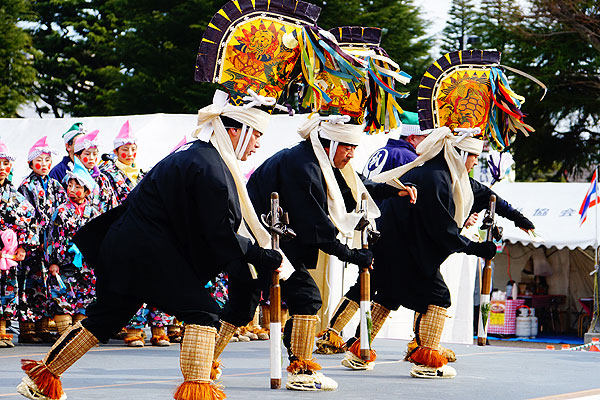 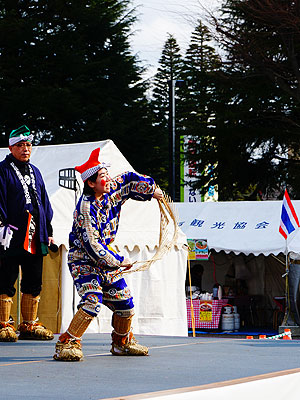 A photo session is held in front of the main hall of the castle proper at the Nejo Castle Historical Site, which has been chosen as one of Japan’s Top 100 Castles. 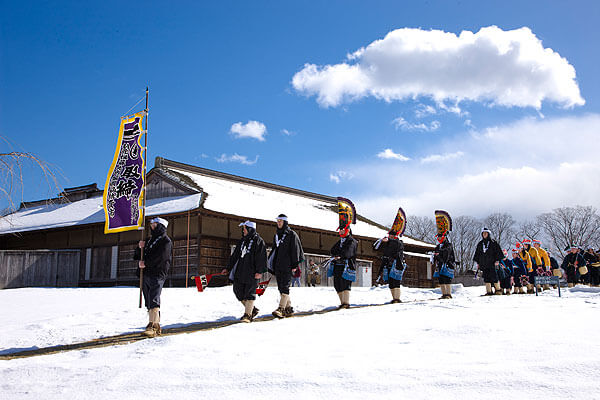 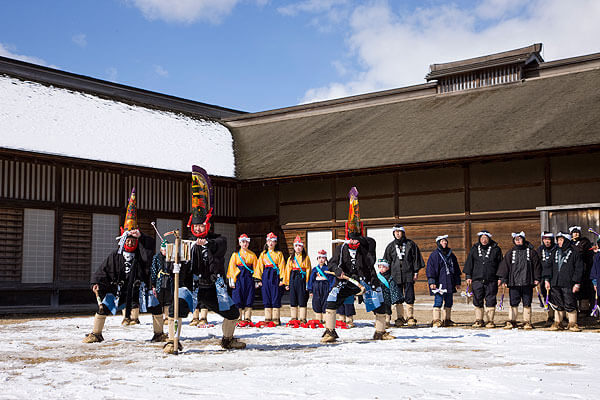 Oniwa Enburi takes place at Kojokaku, which was the mansion of a big-business family in the Meiji era. In the past, Enburi dances were also performed on the dirt floors and in the tatami rooms of major landlords and influential merchant families. Oniwa Enburi recreates the elegance of those times.
These performances, which take place in a garden at night have a dreamlike atmosphere different from daytime Enburi. Enjoy the Enburi performances while tasting sweet amazake and Hachinohe senbei soup, indulging for a moment in the pleasures of the lords and ladies of the manor houses. 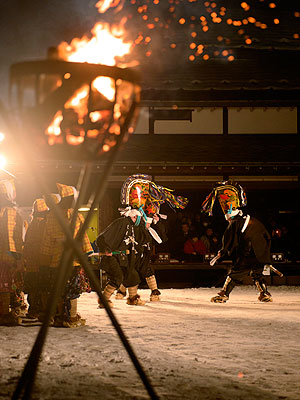 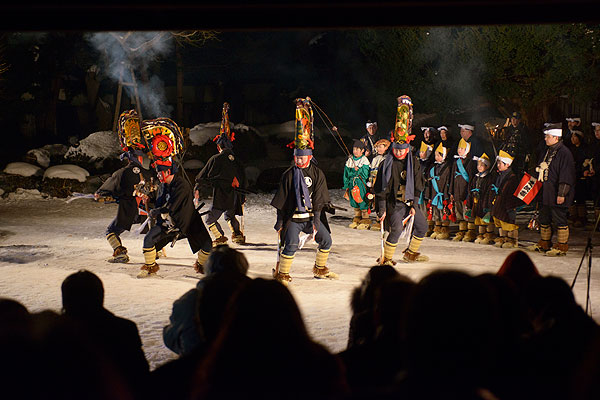