What is the Hachinohe Sansha Taisai?

The Festival is a five-day long celebration that takes place from July 31 to August 5 every year in Aomori. It features 27 unique floats that can reach up to 3 stories high. Each of the floats is beautifully decorated with scenes from classic Japanese and Chinese folk tales, Kabuki plays, historic battles, and more! When the festival is held at night, the floats are illuminated to create a fantastic and etheral spectical.

Another highlight of the festival is its traditional procession of mikoshi (portable shrines) from the Ogami, Chojasan Shinra and Shinmei-gu Shrine. The procession of these three shrines and their omikoshi are joined by an assortment of different folk performers such as lion and tiger dancers, as well as people wearing traditional costumes. 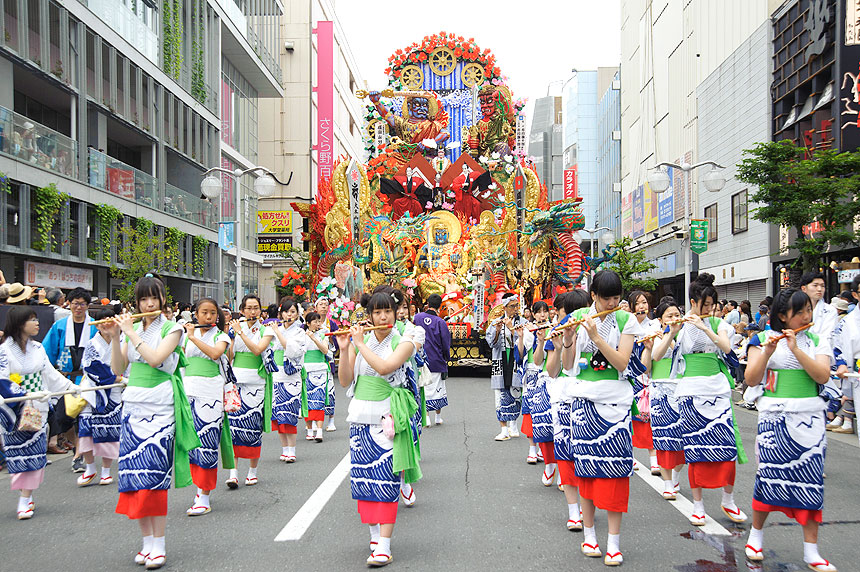 The History of Hachinohe Sansha Taisai

The festival’s history stretches all the way back to 1721 when the people of Hachinohe held a procession from a shrine to give thanks for a good harvest. Over the years, wealthy townsfolk began adding floats decorated with dolls to accompany the procession and others joined in as lion dancers, tiger dancers, and so on. Soon, it had developed into the biggest festival in the Hachinohe area. In the early Meiji period, a final third shrine was added to the festival route, forming the base of the modern Sansha Taisai, or Three-Shrine Festival.

The Hachinohe Sansha Taisai of today still features the original shrine procession, but the simple floats of old have since evolved into gigantic moving stages where scenes of traditional folk tales and dramatic plays are put on display. These massive floats, or dashi in Japanese, are constructed by neighborhood groups and organizations within the city, and have become the main feature of the festival.

Dashi (the Festival Floats of the Sansha Taisai)

From around three months before the festival takes place, neighborhoods across Hachinohe begin constructing their dashi or festival floats. Unlike many other festivals, the people that make these parade floats aren’t professionals. Instead they are just regular members of the community who gather together after they get off from work to construct these massive floats.

After the festival is over, all of the floats are dismantled and broken down to prepare for the next year. Each year the float groups pick a new story for their dashi and start from scratch. This ensures that no two floats out of the 27 are the same.

This impactful display of tireless ingenuity is what lends the festival its lasting impression of beauty, vibrancy, and ephemeralness.

The Unfolding of a Dashi

Another unique feature of the festival floats is that they are made to be able to fold their layers and portions down or open them up, almost like a pop-up book. This feature is to help the floats fit through the narrow streets and sharp corners of downtown Hachinohe, but it also provides a stunning display for spectators watching the parade. The best time to see a float is when it is just starting to open up and expand, so watch the floats carefully and don’t miss your chance!

When & Where to Watch the Hachinohe Sansha Taisai

On July 31 & August 4 the floats of the festival are stationed on display in the streets of downtown. The floats are illuminated as the night sets in and the bands of traditional flute and drum players that accompany each float create a whirlwind of music that energizes the air with palpable charge. This fantastic scene is registered as one of Japan's "Best Night Views". 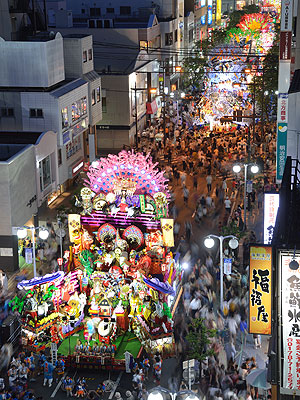 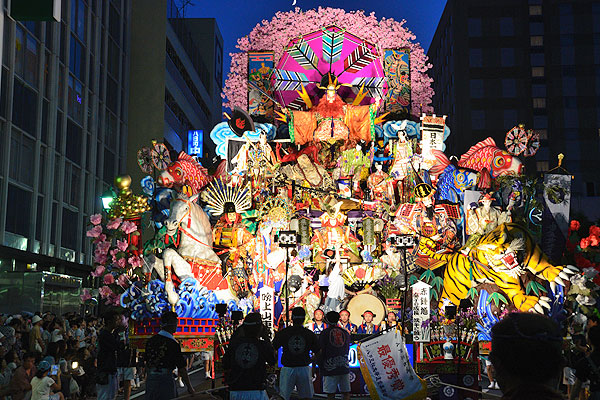 During the 1st & 3rd the floats move through the streets of Hachinohe, a scene that brings a classic Japanese picture scroll to life.

Besides the festival floats, the procession also features a diverse range of performances and groups, including shrine maidens, people in traditional warrior attire, tooth-chattering lion dancers, and comical tiger dancers. 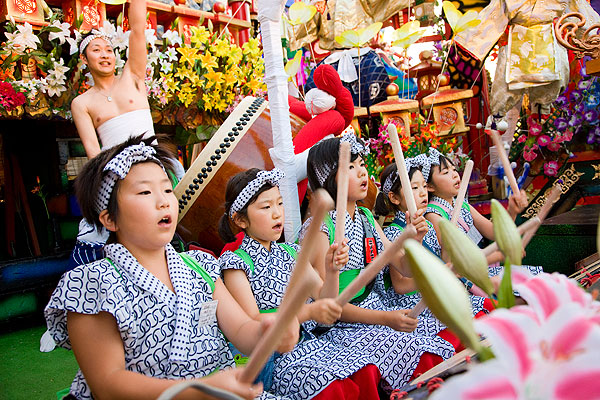 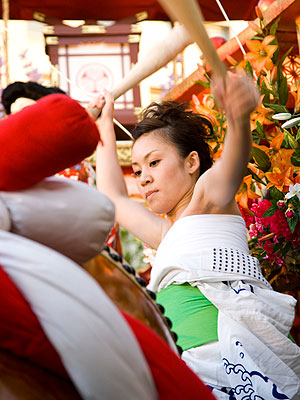 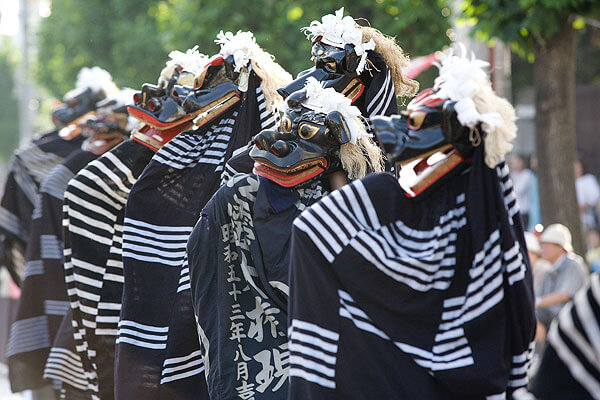 Horyo kagura, a unique kind of shrine music, was initially created by a Buddhist monk and has been passed down through the ages at Ogami Shrine. The central element of the music involves several dancers wearing lion masks which personify the deity Gongen-sama which they move in a precisely timed order and rhythm to cleanse the hearts of the spectators. 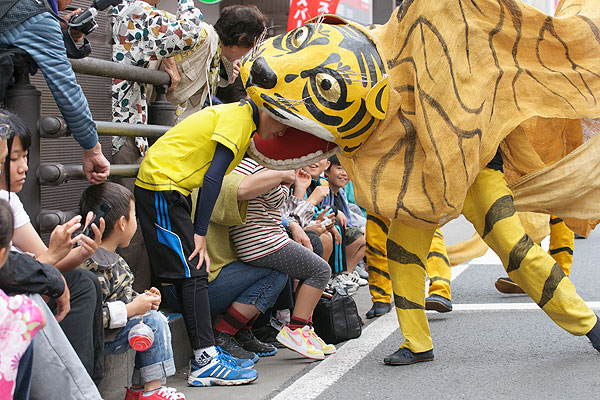 With their humorous movements, the tiger dance entertains roadside spectators. Passed down through the years in many parts of Hachinohe City, including Same, Minato, Konakano, Niida and other areas, the tiger dance is performed through out the parade. It is said that if you are bitten by the tiger, you will have good health, making this a very popular performance. 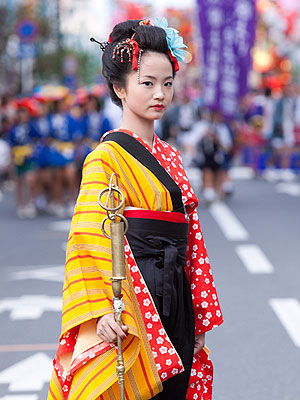 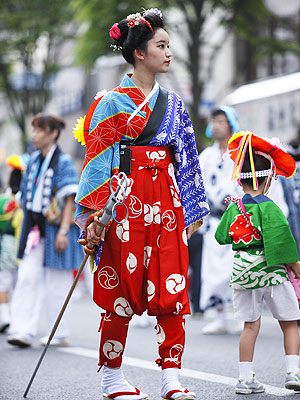 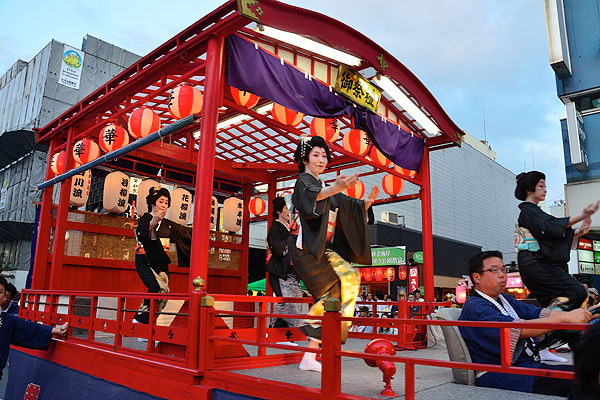 The end of the parade features the hanayatai, where dances such as the Hachinohe kota (ballad) are performed.

On the middle day of the festival, the procession takes place in the dark of night. The floats are brightly illuminated, creating an atmosphere that is fantastically beautiful. 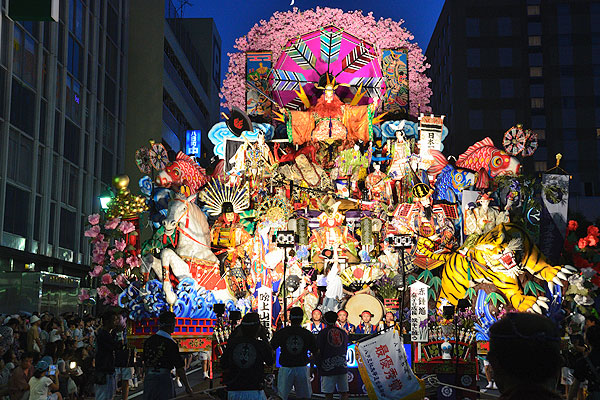 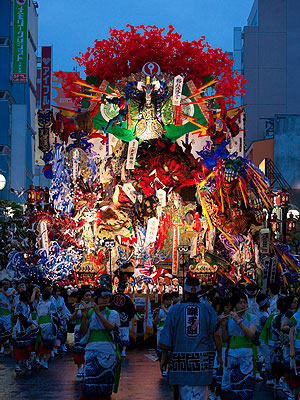 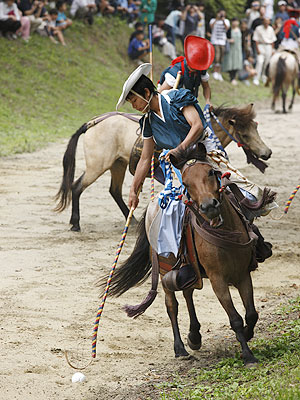 Kiba Dakyu, or Japanese horseback polo, is played every year at the Chojasan Shinra Shrine. Long ago, the Hachinohe Domain was a place famous for its horse husbandry. Then one day in 1827 the eighth lord of the Hachinohe domain, Lord Nobumasa Nanbu, began using kiba dakyu as a way to improve the riding skills of his soldiers. Today, this kind of traditional kiba dakyu remains only in Hachinohe, the Imperial household, and Yamagata Prefecture.

During the game, riders are divided into two teams (red or white) and compete by using a pole with a net to catcha ball and throw it into their goal, all while on horseback. This ancient sport is often called the polo of  Japan, and collisions between players and their horses add an air of excitement to the game.